Over the past decades, ship systems have become increasingly complex, software-driven and integrated. Moreover, systems and equipment are typically delivered by a range of different OEMs for any one ship, without the presence of a strong system integrator as we see in e.g. aviation and automotive. This has led to a number of steadily increasing challenges in designing, building, operating, maintaining and assuring these systems. Referring to Figure 1, our accumulated experience and customer feedback shows that:

The Open Simulation Platform (OSP) initiative emerges from these challenges, with a short- to medium-term vision of:

and a long-term grand vision of:

The OSP was initiated through a MoU signed in 2017 and confirmed in 2018 by a partner agreement between DNV GL, Kongsberg Maritime, SINTEF, NTNU. To ensure a wider anchoring across the maritime industry, increase funding and assure the relevance and timeliness of the initiative, a JIP was launched in Q2 2018 and formally started with 20 additional partners in Q3 2018, see Figure 2. The JIP closed as planned in Q2 2020 after two years of collaborative development.

The OSP JIP was founded on a set of key principles that remained intact through the 2-year project, as shown in Figure 3.

Protection of IPR: In order to share and re-use digital twin components, it is a prerequisite that no IPR contained in the component is exposed to other parties without the IPR owner consent. This requires black-boxing the individual components, and also making sure they cannot easily be reverse engineered. Critical IPR in a digital twin component would typically be the physics model of the equipment and its performance, and the control system software including HMIs. Various ways of black-boxing are discussed in [REF Cabos and Prostep IVIP], and not further elaborated here.

Co-simulation: A major challenge is to enable integration and orchestration of individual models and digital twin components originating from different stakeholders, simulation tools and platforms. Co-simulation solves this by decoupling the system simulation in its individual components, with each component containing a solver and executing independently of each other, synchronizing and exchanging information only at fixed intervals determined by the co-simulation engine.

Common standards: To enable efficient construction of large co-simulations from a range of individual components, interoperability and common standards are needed. This pertains to both run-time requirements and component interfaces We have set out to build on established standards wherever possible, only adapting and expanding on these when necessary for our maritime context.

Open source:  In order to drive standardization, ensure interoperability between stakeholders and tools, and enable common working processes, we strongly believe that a common, open-source software for co-simulation is needed. The idea is that any stakeholder can integrate the open-source software in their own working processes and tools, thereby simplifying cooperation and ensuring a common ownership and further development of the software.

Collaboration: The challenge of complex systems is too big to be taken on by any individual stakeholder or tool. Therefore, the OSP focuses on collaboration and interoperability between tools, platforms and stakeholders. 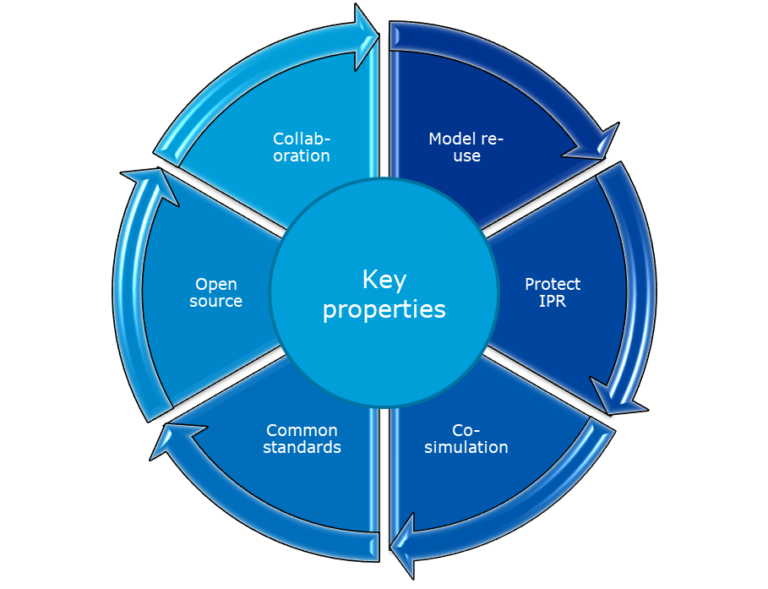 The OSP JIP had the following main deliverables, all can be accessed through the project website www.opensimulationplatform.com, where also more details can be found:

OSP LibCosim: The OSP LibCosim is an open source software for co-simulation, built on a combination of technical solutions from the OSP initiators and other established industrial solutions, in particular the Functional Mockup Interface (FMI) standard from the Modelica Association. FMI has been driven primarily from the automotive industry, where they have similar challenges with complex, integrated systems and software. The number of modelling/simulation tools that support FMI export is already large and increasing, enabling generation of so-called Functional Mockup Units (FMUs) that adhere to the FMI standard for co-simulation. The key working principle has been to use the best available technology and knowledge to meet the requirements for the OSP to efficiently serve its purpose. The LibCosim source code is available on GitHub, free of charge, through the MPL 2.0 open source licence.

OSP Interface Specification: Since we want to avoid re-inventing the wheel in any way, building on the FMI standard, and a growing number of sister standards from Modelica, appears to be a good choice. However, there are maritime specific needs that must be addressed. The first goal of the OSP interface specification is to reduce the effort required to construct a simulator and hence make it cheaper and more affordable, which can open up for a more widespread use of simulators in existing and new applications. The second goal is to make the connections between the simulator and a control system easier. Finally, we want to make models more available. The OSP interface specification is published free of charge under the CC-BY-SA license, with the ambition of maturing this into an established industry standard. A software tool for verification of model interfaces per the defined specification is also available.

OSP Reference Models: This is a set of reference models including some of the most common marine systems and ship dynamics, adhering to the modelling guidelines and interface standards in the OSP Interface Specification. The reference models may be freely used and further developed by other parties, free of charge, and is available on GitHub together with OSP LibCosim through the MPL 2.0 open source licence.

Use Cases: Three use cases, together spanning across the ship lifecycle, have been developed together with the JIP partners to test and verify the OSP software deliverables and standards, to explore value creation from the use of OSP, and to investigate possible business models:

In a Hardware-In-the-Loop (HIL) setup, the physical equipment is replaced by a HIL simulator, which models the real actuators, dynamics and sensors, see Figure 5. The control system, still running on native hardware including operator stations and other HMI’s, networks, etc, now sends control signals to the simulated equipment, and receives simulated measurements back. In a good HIL simulator, the controls system does not notice the difference between being connected to the real equipment and the simulated equipment, enabling thorough testing of functionality, robustness and performance in a lab setup. This has been proven to work well in many industries. However, there’s one major drawback, and that is the reliance on the control system hardware (the H in HIL). This means you rely on a lab setup where the correct hardware is made available for testing. For individual systems, this can work well, especially for a newbuild project where e.g. the FAT can be used for extended simulator-based testing. However, for a ship in operation, the necessary hardware may not be so readily available. Moreover, and more importantly, the reliance on hardware means that integration testing between several systems only can happen if the hardware from all involved manufacturers are collected and connected in one location. For a ship, this is usually not the case until at the shipyard, close to vessel delivery.

The next step is, therefore, to virtualize also the control system hardware, as illustrated in Figure 6, leading to what we call a Software-In-the-Loop (SIL) setup. Now only the control system software remains unchanged (since this is already software), but it is running on emulated and virtualized hardware. This could be e.g. a soft-PLC or a virtual Windows or Linux PC. Also the operator stations and other user interfaces must be virtualized.

Since this complete setup now consists only of software, it can be viewed as a digital twin component, containing both the physics models of the equipment and the control system running it. 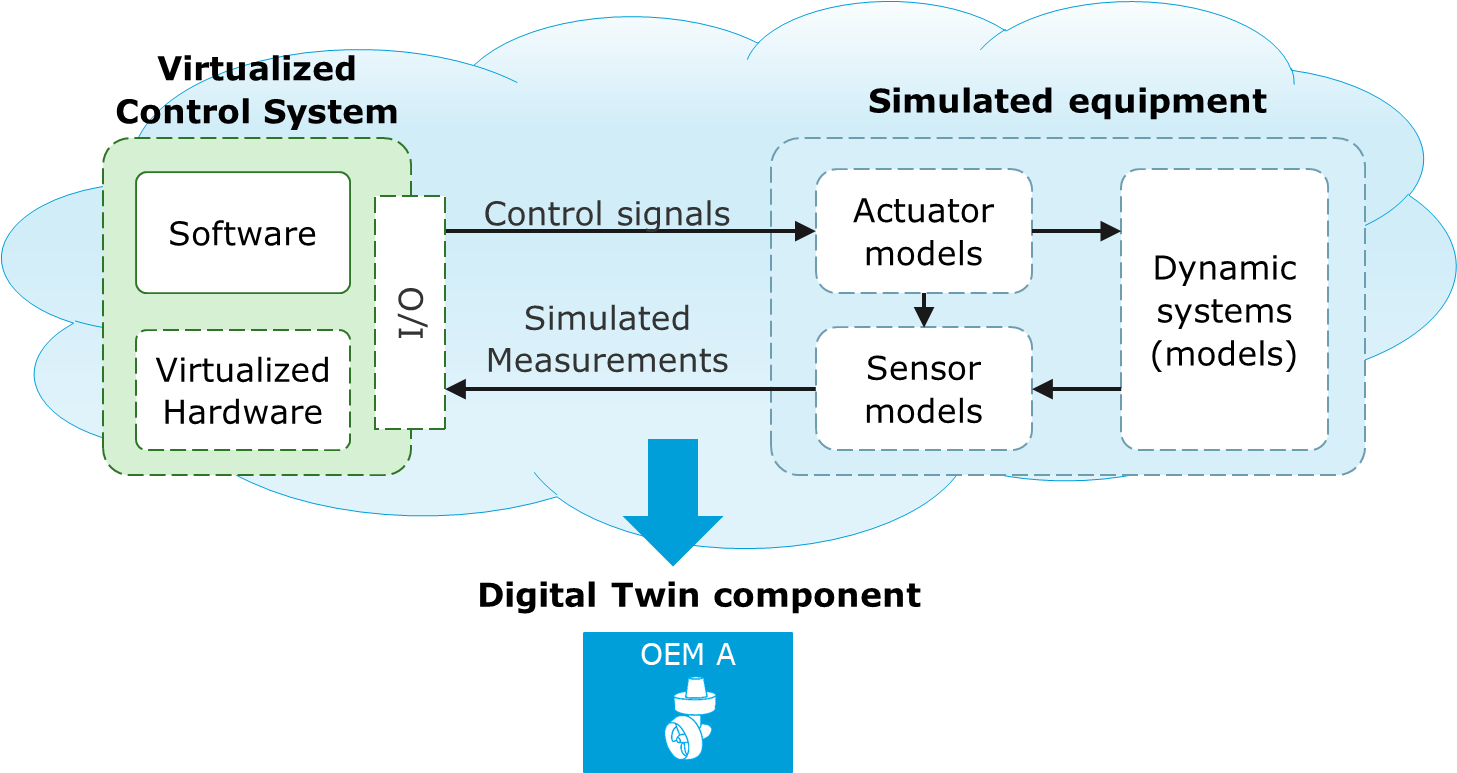 Based on the concept of digital twin components discussed above, Figure 7 shows the OSP co-simulation architecture with a standard interface built around the FMI standard.

The co-simulation algorithm and interface enables digital twin components from different OEMs or other providers to be connected in one simulation, as long as they all follow the OSP model specification. The key idea here is, as outlined above, that these digital twin components contain both physics models and control system software. We can also add pure SW systems such as a monitoring and control system, and pure simulation models such as e.g. a hull model and environmental loads. Finally, the OSP LibCosim includes a remote interface, enabling distributed execution of models. That is, some models may be executed on a different hardware or cloud solution, and connected using the remote interface.

In this architecture, since we no longer rely on the control system hardware, digital twin components from different OEMs can be connected and integrated without shipping equipment around the world. The simulation can in principle be run anywhere with sufficient computing power: on a regular PC, on a local server park, or in the cloud.

Additional benefits are e.g. that time potentially can be accelerated in simulation, meaning test cases can be run faster, and that simulations can be parallelized and orchestrated to further increase test efficiency.

The overaching ambition of the OSP initiative is to enable a virtualization of the working processes with complex systems and software, leading to new working processes and reduced risk. The lower part of Figure 8 shows the typical timeline for traditional ship design, construction and operation:

The upper part of Figure 8 shows how the OSP enables the industry to “shift left” – that is, move systems related activities to the digital twin, enabling them to happen earlier and support the physical builiding process: 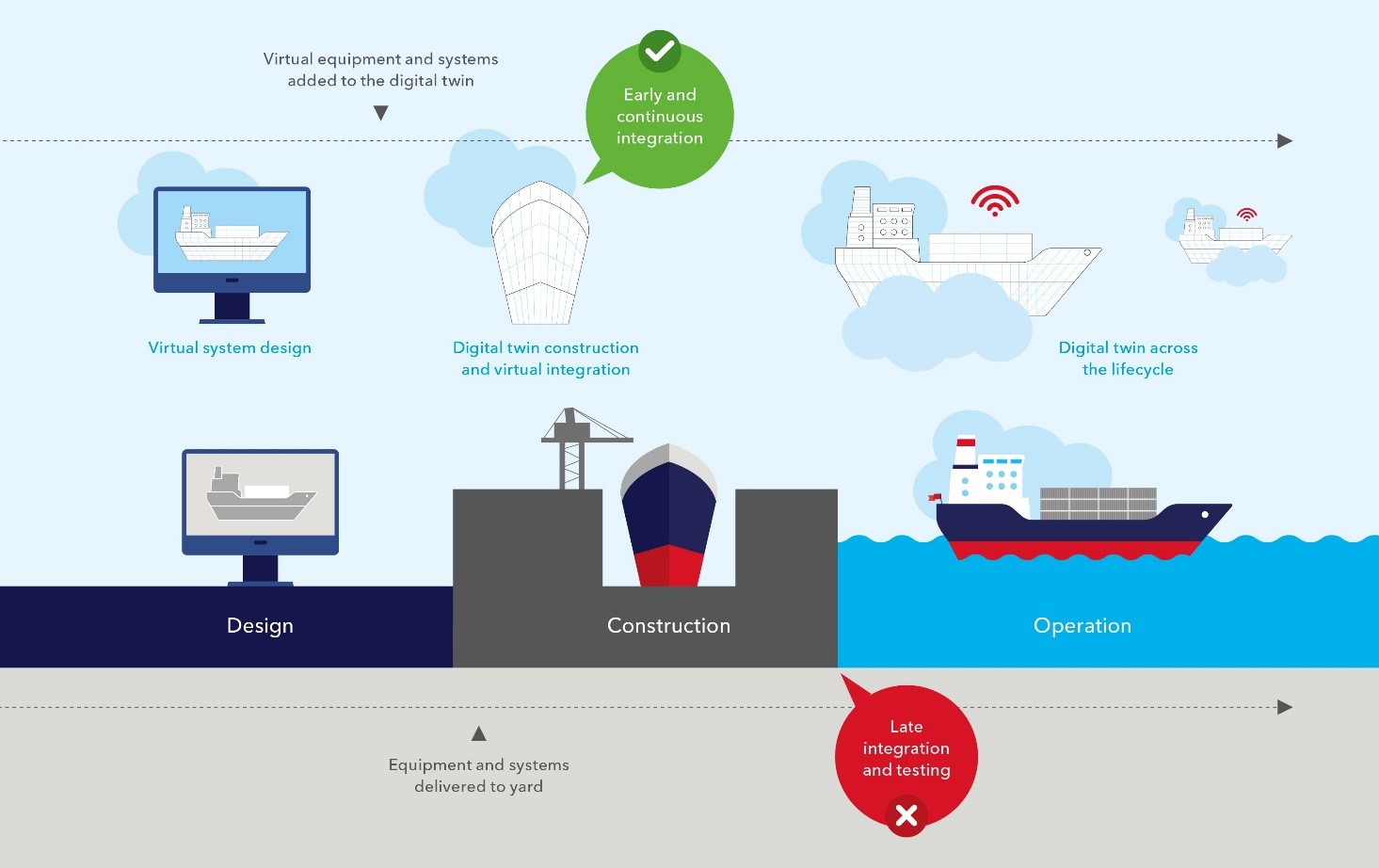